Feed for this Topic

Nutbar returning for another tour of duty

Decile One, now in the big city!

I actually did have thoughts of returning this year.. Just out of interest I've been playing about with ideas about what a movie actually is, in short make something so removed from being a movie that with luck it will universally be condemned by all and sundry as not being a movie though in essence it still will be a movie, well I think it will, you never know till you see it..

However just recently the stove blew two elements, the telly shit it self not that it worries me much, the battery in the car died along with the brakes, the fridge has started making funny noises, the rego is due along with upcoming rates bill plus I have a major art exhibition to attend in Dunedin which will mean an overnight stay so all things considered financially 48 hours is pretty low on the bank account pay-out considerations list

Also I'll be working the Saturday which means doing it in 24 hours and not 48 though I really don't see that as a problem, my very first 48 hour I actually didn't start till 11am on Sunday morning and still had it in on time and made the Dunedin regional final..

so maybe just perhaps next year if I feel like throwing away a few hundred bucks exploring an idea that pretty much everyone's reaction will be "you call that a movie, that's not a movie that's a piece of shit!" but then perhaps just maybe one or two might think that's an interesting approach, perhaps ill conceived and not executed to perfection but none the less an interesting approach though just between you and me I hope not.. So perhaps next year, you never know but I will watch what comes in..

Good luck to those who play the game...

in reply to Shifty:

Hey Mike, technically I'm not back but I have been on the side-lines with a paper bag over my head trying to look inconspicuous all the while just watching what you lot have been up to...

Living in a paper bag this last while has given me perspective of sorts, about film anyway.. not sure why but for some time now films have made me seriously angry and everything that I used to love about them so dearly now just makes me want to madly smash holes in things with the biggest hole smashing implements I can lay my hands on..

Last year I looked at film like an onion and I just started peeling away at the layers... Does it need this layer, nope not really peel it off and throw it away, does it need the next not specifically, peel it off and throw it away.. I just kept doing that till I got right down to the very nub, the heart of what is a film (or what I think is a film) and it was not what I expected..

All those things I thought were essential were actually all the things that were making me angry and frustrated..

Last year I did my own random pick of lines, props etc and made a 6 minute film with just 1 naked male who's only movement was to move his head once.. nothing sexual about the nakedness, costuming was one of the layers I peeled away and discarded.. there was a second unseen character so there was dialogue and just two props.. Although the naked man made not one step he moved through five different sets without fancy green screen or any trickery of camera and editing, in fact there was no editing at all, just one continuous shot and to me it worked perfectly.. Note I did say "to me" most everyone else I'm sure would have taken issue with that..

Of course if anyone else tries to do it like that this year you can point your finger at them and say "use your own imagination buster and not rely on others to think for you" The ultimate end-game is to get it down to 1 naked character, 1 prop, no dialogue and yet still tell a story but that's a way off yet as I still haven't peeled away all the layers that make a story a story..

But like I say finances being what they are I'll be doing it again from the side-lines.. Luck has not been on my side lately and everything I seem to touch blows up and sucks away at my meagre resources..

However I will watch closely what Nutbar and Nimlin do though not comment, nothing personal I just feel I no longer have the right to make any statement on anything anyone else does, it's not my place...

I miss you already.

in reply to Shifty:

Shifty!
Ah, we love you, and we will miss you.
And screw the haters, thats what they're there for!

Team Red Apple are back for another year. Just need an editor, some writers, a cameraman and some actors. Plenty of time.

"Wow the cinematography is beautiful! I can't believe this didn't make city finals." 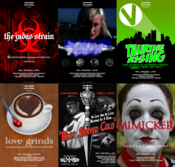 Team Chromatic Aberration are back
This will be our 7th year and we are strong!

NITRO is back in da house!

Got a boxing gig on on Saturday, so gonna be a real quick shoot on Sunday morning for us, but we prefer to think of it as 36 hours of quality writing ;)

Oh man, super bummed you guys are in Auckland this year. Go hard up there! Can't wait to see what you make.

im in but wont be reviewing sorry guys :)

Got a new last minute team entered - mostly made up of the old Artificial Nipple Team but with a few new people along for the ride.

Taking up the mantle of Team Leader I have a new team name "Ask Me Tomorrow". (Wanted to keep close to the Artificial Nipple name in letter order for the benefit of seeing some of the same teams in the Auckland heats, presuming alphabetical programming stands.)

in reply to Craig Parkes:

I changed team names (to a name I like much less) to be in the same heat as all my friends in Fractured Radius, so naturally this year they dropped out of the comp entirely. Neat.

Fear not Morgan, you'll still be awesome and your team name is cool!

We're (mostly) all along for the ride again this year..
Dont think we ever thought about the alphabetical thing... smart if you wanna be with your mates!! or away from the regular 48 teams :)

Welcome to the forums.